Don’t miss our Summer Promotion - $695/area is back by popular demand!
Lipo is all we do and our prices are the most affordable in the country!
Director of Surgery and Head PA, Rod Davis, has performed over 15,000 liposcupture procedures and works with a team of highly skilled medical professionals. You can view before and after pictures of actual patients who have reshaped the way they live with Pacific Liposculpture.
Contact Pacific Lipo for a free consultation - you'll have the opportunity to meet with our specialist Rod Davis, PA, Director of Surgery.  Consultations are pressure free and allow for you to decided if liposculpture is the right choice for you.

Lock in our summer rates while they last!  Call 858.427.8899 or visit www.PacificLipo.com to fill out our Contact Us form.
There is only one Pacific Lipo and we are located in the La Jolla area of San Diego, CA. So don’t be fooled by our competitors! Call today to speak with one of our patient coordinators.
*$695/area is a limited promotion
Posted by Unknown at 3:11 PM

Want your Pacific Lipo testimonial to be featured on our page?
Just simply email us at info@pacificlipo.com with your testimonial and photos of you before and after the procedure.  Helping real patients share real stories.

“I just want to thank you for giving me my confidence back! I've been self conscious about my cheeks for over 8 years. After having my son, it seemed like I couldn't lose the weight no matter what I did, and even if I toned my body, my cheeks were still fat. I'm not even all the way healed yet, but I wanted to show you a couple pictures of the dramatic change. (before and after) This has helped my self esteem so much that it's helped me and my husband's love life. I couldn't be happier. Thanks a million.”
BreAnne N.
Fort Irwin, CA

Posted by Pacific Liposculpture at 3:53 PM

Having trouble with your Fitness Measurements?  Lose inches immediately and permanently with a safe, and minimally invasive procedure.

Located in San Diego, an area heavily populated with military bases and personnel, Pacific Lipo has helped many men and women to get their shape within military requirements. Liposculpture can help you pass your measurements and maximize your PFT.

At Pacific Lipo we understand that some people genetically have a difficult time losing weight in their chest and midsection.  For military personnel this may mean a cut in responsibilities or relocation.  It is common for members of the military to turn to liposculpture.   This safe and effective procedure can trim body fat quickly to help you meet measurements and perform better.

The liposculpture procedure is minimally invasive and requires little to no downtime.  Results can be seen immediately and are permanent.  The incisions made are so small that they are barely noticeable once healed.  Besides your results, people won’t be able to see that you had any work done!

View more Before and After photos here!

Call (858) 427-8899 today for your complimentary consultation or complete a virtual consultation. We look forward to helping you reshape the way you live!


Tired of Having a Double Chin?

Diet and exercise play a heavy role in the features of our face, but for some of us, doing everything right still cannot achieve the results we are looking for.  Getting a much smoother and more defined jaw line with chin liposculpture can truly make a world of difference for your face and you won’t have to bother with painful injections or other artificial enhancers.


I would never even consider going anywhere else.  Rod Davis is the best in the world of lipo.  I first saw him for removal of my double chin--the results were amazing!  The same weekend, I got a perm, and when I returned to work, some of my co-workers did not even recognize me!   ~Nancy H., San Diego

At Pacific Liposcuplture, our advanced liposculpture procedure can significantly improve unsightly neck rolls, bulging jowls or double chins.  If you want to look younger, thinner, or have a more defined jaw line, Pacific Liposculpture is right for you.

This procedure usually takes less than 60 minutes and is performed under local anesthesia so you will more than likely be able to drive yourself home.  Most patients are also able to return to work in just a few days – and your coworkers will marvel at your improved appearance without knowing you had any work done. 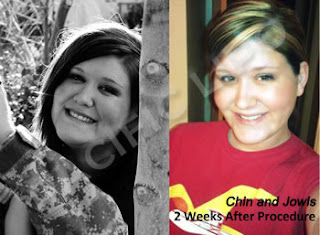 View More Before and After Photos

Call 858.427.8899 to talk to a Patient Coordinator and schedule your complimentary consultation!
Posted by Unknown at 10:21 AM

Too embarrassed to wear shorts?  Tired of your thighs rubbing together?


If you answered yes to the above, then you should consider thigh liposculpture.  No matter how much exercise you do or how closely you watch your diet, most women are simply genetically predisposed to accumulate fat in the thighs and legs.  Occasionally, some men struggle with the same problem.

Inner and outer thigh liposculpture is specifically designed for people who want to get rid of flabby thighs, saddlebags, and inner thighs that rub together.  You can choose to live with the genetic hand that was dealt to you, or you can treat the problem permanently with liposculpture.  Pacific Liposculpture’s quick and easy procedure will remove fat and tighten the skin, giving you smaller, smoother and younger looking legs.  So why wait?  Many people can return to work the following day with not only slimmer, sleeker thighs, but a renewed outlook on life and an improved self-image.

Submit a Virtual Consultation and a Patient Coordinator will get back to you!

Author: Rodney Davis, Physician Assistant
Not very long ago, getting the shape that you always wanted required invasive surgery that almost certainly resulted in significant postoperative pain, obvious bruising, an increased risk of complications – not to mention an extended recovery time. Yesterday’s liposuction was risky, difficult, and surprisingly is still practiced  by most plastic surgeons who offer liposuction as just one of the several different procedures that they try to squeeze into an already exhaustive list of other cosmetic services. Liposuction is considered a major surgery, sometimes resulting in serious complications in the operating room, causes major bruising, and unsightly scars. This was and remains an aggressive procedure that produces deep bruises and sometimes requires stitches. This in turn can lead to increased scar formation.
Today’s tumescent liposuction, also known as Liposculpture, is a much safer procedure with minimal downtime.  Liposculpture is an advanced form of liposuction that leads to gentler body sculpting and more precise results. Unlike traditional liposuction with general anesthesia, liposculpture patients remain awake while their fat is removed with very tiny instruments. And, because Liposculpture doesn’t use the same heavy sedatives as traditional liposuction, most patients are able to walk out of the treatment offices immediately following the procedure. A good portion of liposculpture patients are able to return to most activities in 1 to 2 days. The tumescent liposuction procedure also stimulates the collagen-producing agents in skin, leaving skin firmer and smoother.
Liposculpture is less invasive. Most areas of the body require only 1 to 2 tiny incisions. The cannula, or straw-like tool that is used to suck out fat, is only 2-3 millimeters wide –that’s about the size of a cooked piece of spaghetti. The incisions resulting from the procedure are barely noticeable after only a few weeks. Because the cannulas are so muchsmaller than the ones used in traditional liposuction, you won’t experience the unsightly scars that sometimes accompany traditional liposuction.
Liposculpture is more gentle. When using larger instruments intraditional liposuction, providers generally make larger, more aggressive strokes while removing fat. Liposculpture uses smaller cannulas, all procedures are performed with shorter, gentler strokes. Patients usually experience only mild soreness the day after the procedure – something equivalent to post-exercise muscle ache. Tumescent liposuction may take longer than traditional liposuction, but the procedure leaves minimal bruising and pain. With today’s Liposculpture, you get the same results as traditional liposuction without all of the bruising and scarring.
Liposculpture is not considered a major surgery, it is a completely outpatient procedure.  Some patients even drive themselves home from the procedure. Many of the serious complications associated with traditional liposuction occurred because the patient was under heavy anesthesia. Patients under heavy anesthesia are unable to tell their provider if the procedure is too aggressive or causing unusual amounts of pain.  With Tumescent Liposuction, complications due to general anesthesia are eliminated. Patients remain awake under light or no sedation, and always able to communicate anything they are feeling. And, because Liposculpture uses only local anesthetic, patients are less likely to experience adverse reactions. Gentle and minimally invasive, most patients are on their feet the next day, and enjoying their new body in no time.
For more information on Liposculpture, contact Pacific Lipo at (858) 427-8899. To ask Rod Davis, Physician Assistant a question – email rod@pacificlipo.com
Posted by Unknown at 10:19 AM